Last day to see the Mobiles at the Monmouth Museum

My Mobiles in the Newspaper 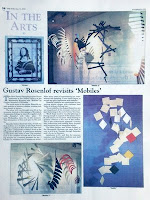 Rosenlof and Aunio Exhibiting at the Salmagundi Club

This is an excerp from an arcticle by Saga Blane in the May 29th issue of NORDEN newspaper on the Salmagundi Exhibit.

“Gustav Rosenlof draws immediate comparisons with Edward Hopper. His primary subject, houses, are rendered in bold, saturated colors and clean geometrical lines. There is a prevading emptiness and marked absence of humanity. Unlike Hopper, however, Rosenlof's emptiness is not one of psychological abandonment. Rather, his paintings are balanced and the emptiness peaceful, a movie-set where the actors have gone off to lunch.
His townscapes and “Shaker Series” evoke a gentle nostalgia for the American Dream, for the wholesomeness of life and communal living. His close-ups of rooftops act as snapshots of the mundane, where everyday elements are blown up and larger-than-life. His work reflects his training as an architect, and the rationality in his paintings harks back to the Scandinavian preference for clarity in pure color and simple lines.” 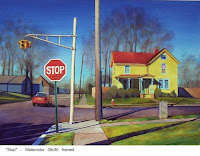 Arcticle in The Holmdel Independent newspaper

The New Jersey Emerging Artists Series continues in the Nilson Gallery at the Monmouth Museum with "Mobiles" by Gustav Rosenlof of Hillsdale.

The sixth artist in the series, Rosenlof creates mobiles of abstract shapes, evoking subjects found in nature.
The show will run through June 29 at the museum, located on the campus of Brookdale Community College in Lincroft. A gallery talk with Rosenlof will take place 7-8 p.m. Wednesday, June 11, at the museum. This discussion is free and open to the public.
Rosenlof states about his work, "I built my first mobiles as a student at the High School of Music and Art in New York City after seeing a show of Alexander Calder's work at the Guggenheim Museum. I spent hours walking up and down the ramp in awe. The architecture of the mobiles and the art of the building merged at a seminal moment for me. I became an architect and I became an artist. After many years of concentrating on architecture and painting, I have lately begun to revisit my early fascination with mobiles."

Rosenlof 's mobiles are constructed by connecting plastic shapes with stainless steel links or ordinary fishing line.
"In my mobiles, the shapes themselves are an integral part of the structure, not just objects balancing on the end of wires," he states.
"Each shape must be visually pleasing, be strong enough to support all the shapes below it, and balance at one point, while holding its position relative to the rest of the mobile. This is the architectonic approach. A strong idea, influencing and melding, form, function and structure into an integrated whole."

The Main Gallery and Nilson Gallery at the Monmouth Museum are open from 10 a.m. to 4:30 p.m. Tuesday through Saturday and 1-5 p.m. on Sundays.

After the Opening Reception - Monmouth Museum 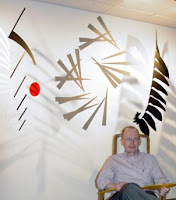 Links to my ART and BOOK sales/preview galleries: